skip to main | skip to sidebar

After receiving 50 million kroner to our science center, our planning have changed from "dreams" to "reality". This also means that we are in a hurry. We need to gain as much experience in the field as possible, to be able to design and make a science museum worth visiting. The other day I stumbled across a very helpful blog named "Charlie's European Museum Crawl". Charlie Trautmann describes himself with these words:

I'm currently on sabbatical leave from my position as executive director of the Sciencenter, a hands-on science museum in Ithaca, New York. From July thru October 2007, I will be visiting a series of European museums to assess how they view their role in bringing environmental concerns to their audience.
In his blog he has written long reports from each museum/science center visited, describing housing, exhibitions, the quality of individual exhibits and more of the things insiders like to discuss. It is good reading for the general public as well, if you are one of those who like to include museums to your to-do-list when you are travelling.
Trautmann has also written a report from his travel, which can be downloaded from Sciencenter's webpages.
Posted by Mona Holmø at 23:34 28 comments:

Waiting for the snow to disappear 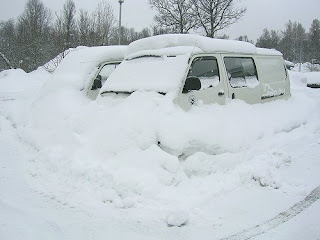 This time of year is the least fun season in Tromsø. Knowing it is spring further south, makes it even more depressing to look outside and see snow everywhere. It varies from year to year when spring decides to show up. Anything from early April to early June is normal. This year it seems to become a late spring. The last weeks we've experienced 20-30 cm of snowfall on a daily basis. Luckily some of it thaws during the day, but we've gotten our share of excersize showeling snow.

One of the reasons I want a snowfree environment, is my discovery of a cool experiment in November last year. A couple of days before the winter kicked in, I learned about the micrometeorites. Dust from space fall to earth, tons of it every day. But every individual piece of stardust is too small or almost too small to see for the human eye. But with a magnification of just 20, they are easy to identify.
The meteorites we are talking about here are the iron-containing ones. When they enter the atmosphere, they melt and get a characteristic round shape which is easy to identify in a sample.
NASA and others have published lots about the topic, including photos and how-to's. The way I search for the extraterrestrial dust is the easiest one, I think. I use two plastic cups. Inside one of them I put a strong neodium magnet. The second cup I place on top of the magnet, locking it between the two cups. Then I tie strings to the cups in a triangular shape, allowing me to walk straight and hold the cups just centimeters above the ground. With this you're ready to hunt for the stardust, taking your cups for a stroll or three. The micrometeorites will be attracted to the magnet and stick to the bottom of the cups. To check if your sample contains the round beads, transfer it to a post-it note and look at it with 20x magnification or more. Good luck hunting! 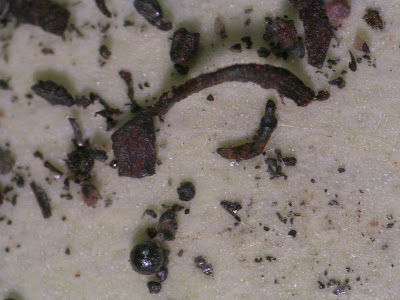 Some of my interests include history and linguistics, and since I was a child I was fascinated by the viking era and its influence on the western world. They were often descibed as villains, but they were also farmers, skilled craftsmen building beautiful longboats, navigators and explorers.

As a kid I used to search the Atlas for Norwegian words in other countries placenames, and found quite a few on the British Isles. The other day I read a text in the Norwegian book "Typisk norsk", ed. by Petter Schjerven, showing the influence the norsemen had on the English tongue. Here it is, remarkable isn't it?

You cannot hit (hitta) or scare (skirra) anyone, or scream (skræma), scowl (skúla) or die (deyda) without using Scandinavian verbs, nor can a fellow (félagi) or a husband (húsbòndi) look in anger (angr) through the window (vindauga) at the sky without using Scandinavian nouns. You cannot do without essential pronouns like they (þeir), their (þeira) and them (þeim), not to speak of both (báðir) and the same (sami), nor can any Englishman do without a descriptive inventory of adjectives which includes not only odd (oddi), ugly (uggligr), ill (illr), wrong (vrangr) and scant (skamt), but also happy (heppin), meek (mjúkr) and low (lágr).

Talking about vikings, you know the helms with horns on them, they had nothing to do with vikings! They have found more than 10000 items of weapons (swords, axes, shields), and more than this of clothing from the viking era in Scandinavia. They have found one - 1 - helmet, and this one didn't have horns on it. So most vikings probably didn't use helmets at all, and if they wore any helmets they were probably made of leather.

They have found a tapestry where the rider in front of a procession wore a helmet with someting looking like horns, and they have found small figurines with horn helmets. These probably represent the Gods - meaning; the Gods used helmets like these, but never man. It would probably be too inconvenient using helmets in the man-to-man swordfights they used to have.

The horn helmet myth started most likely back in 1876, at the opera! The Richard Wagner grand opera Nibelungringen needed a big scale sceneography, and the operasingers were equipped with horn helmets. So when people try to look like vikings today, they dress up like operasingers!! ;)
Posted by Mona Holmø at 19:49 4 comments: 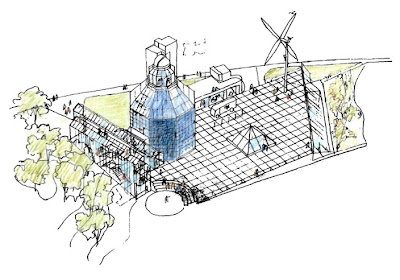 Last week we finally got the money we needed to build a bigger and better Science Center here in Tromsø! We received 50 million Norwegian Kroner from a local fund called RDA, and that is enough to start the process of extending our Planetarium building to 3-4 times its present size.

It is a dream come true! Imagine being a part of the process of building a science center from scratch. The workload will be on the heavy side, but what a fun workload it will be.

The building has to be designed to our needs, and fit the architecture of the building we have. I want a building worth visiting because of its architecture too! The drawing above is not necessarily the design we will go for, but it gives an idea of what we are talking about. Most of the building will be hidden underground, the ground is rather steep at the location.
How do we want the rooms? Which floor will work best? What about storage space? Laboratories? Public areas? Definitely, a decent coffee shop! (all campus will come running for a real cup of coffee!) A shop crammed with geek toys!

We will definitely need consultatation from other science centers - what to do and what not to do?

And we have to start planning for real which hands on exhibits we want, fitting into our four major topics.

The skies above
Climate and weather
Energy and the environment
Fisheries, hunting and fish farming

We also want the classical stuff, like the Beornouli-blower (did I spell it correctly?) and the pendulum - every science center need those.

We have lots of ideas on how to make our science center unique. I do not want the feeling I sometimes get at other science centers - that they lack an idea and a soul, they've just bought lots of installations and scattered them around in a rather sterile environment. I guess I am looking at them with my Science Center goggles on, always looking for ideas and inspiration for our own science center.

So, if you have any ideas you wish to share with me, send me a note!

Two years to plan and build. It will be frustrating. I am sure we will have to compromize between what we want and what we can afford. But it will be fun, anyway! Imagine, building a Science Center from scratch! We are doing it, finally!
Posted by Mona Holmø at 22:43 3 comments:

This winter has been hectic, and I have been neglecting my blog. Shame on me! But now I am back. It has truely been an interesting winter up here, and I will tell you about it in my coming blog posts.

Some of our mathemathics activities include the use of Zometool. Zometool is a great tool for a variety of construction activities, and I am sure many of you are familiar with the toy. To be able to build freely, you need a variety of the sticks available, and that might be to expensive for some of you. But don't worry, there is a cheap alternative!

I visited Innlandet Science Center a couple of weeks ago, and there they used coctail sticks and peas instead. It is not as solid as Zometool, but it works great. Better than spaghetti and marshmellows/hotglue, as many are familiar with. So if your need a low-cost building tool, try this one. It is the best one I've seen so far. The annual Science Days has come to an end, and it was a long stretch for us at the Science Center. We had two successful days at the Science Faire in Tromsø, and our booth was awarded as the second best presentation. A total of 5000 people visited the Faire these two days. 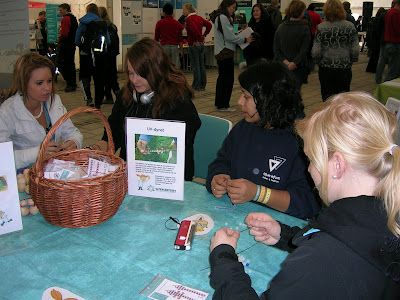 Our stall presented some simple ice experiments, focusing on the increasing meltdown of the Arctic icecap. And kids and adult alike could make their own UV critter for free. Luckily it was two sunny days, and the kids were running around outside the tent after visiting us, to test their UV beads.

SciencePub, a collaborative Polar Year science project between geologists, archeologists and science centers, shared the second place with us. Being a member of the SciencePub project, it was a tribute to us as well. They had a sandbox where kids could excavate real archeological items found in Northern Norway.

The winner was Medical Faculty, bringing a infrared camera to the Faire. I want one for our Science center! It is an excellent way to display the difference in temperature between the body core and the limbs. I am one of those with constant cold hands and feet, and this cam clearly visualize that I have cold feet and a warm heart.

The week after we visited another faire at Finnsnes, with the same topics as in Tromsø. We also visited a TechFest at Skjervøy the same week, where all 4th and 10th graders in five counties were offered a variety of science activities in one day.
Posted by Mona Holmø at 10:27 3 comments:

Labels: International Polar Year, outreach, Science Faire, weather and climate
Older Posts Home
Subscribe to: Posts (Atom)
This blog is dedicated to the fun of science and technology, the good learning moments and the daily life at a Science Center north of the Arctic Circle.